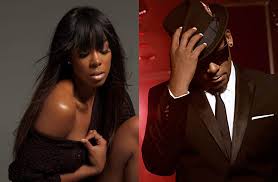 Kelly Rowland is gearing up for a very busy summer as one of the judges on The X Factor, but until then, she’s been getting some tour dates in as she prepares to drop her new album, Talk A Good Game.

Last night, she took to the stage in Silver Spring, MD to perform some new tracks off of the upcoming LP,but once she got to “Dirty Laundry” she couldn’t help but brake down.

I am so proud of Kelly for allowing herself to feel vulnerable in front of her fans. Letting the world know about an abusive and dysfunctional relationship takes an enormous amount of courage because of the ‘what if’ factor. When I watched the video I broke down myself and the audience was great support. I pray that Kelly had all the success in the world. I can’t wait to see the rest of the album.

Kelly Rowland is now labeled as an OnPointCeleb! MuaH!

Earlier this month, they announced that they would be linking up for their month-long ‘Lights Out’ U.S. tour which starts this Thursday in Minneapolis, and last week Kelly had the Internet buzzing after she dropped her emotional The Dream-produced new single “Dirty Laundry.”

Now, the two are teasing yet another track they’ve collaborated on together titled “Where Have You Been.”  The record is a make-up-to-break-up song that features the two singing to each other about how they’re relationship has been going through some major problems but they still want to make it right.

The Dream’s IV Play album is due out next Tuesday, May 28. Meanwhile, Kelly has some stiff competition when her album hits stores on June 18. She is sharing her release date with Kanye West and J. Cole.

Kelly Rowland recently released a song called “Dirty Laundry”. The song talks about how Kelly had a lot going on in her life from an abusive boyfriend to not speaking to Bey as much because of her boyfriend.

In a chat with Billboard this week, Kelly expressed that the song was emotionally exhausting and extremely difficult to record, needing almost a dozen takes to get it right. She also had to walk out of the room before the song was played during a recent listening session:

It was very emotional. It took me days to record. I had to get past being so upset and actually sing the song, not sob through it. I always hope that my music can inspire someone, the same way other artists inspire me. Dream said, ‘I want to write you a record so that people will know exactly who you are, underneath it all.

The song was a result of Kelly revealing some of her personal life to The-Dream who was able to turn her words into a great record. He tells Billboard:

What unfolds on TV or on the Internet, it’s never really that. You think it is but it’s just not. When you have a stage like Kelly has, you should talk about that part of your life. I think Kelly’s way deeper than that.

Tons of celebs took to Twitter to show their support after the song was released yesterday, including Kelly’s former bandmate Letoya Luckett, Gabrielle Union, and Tika Sumpter.

The Dream: @KELLYROWLAND …..You Are Great, Love You much. #DirtyLaundry

Lala: When you make pain look this good it never wears out… – Dirty Laundry by @Kellyrowland

Jackée Harry : S/O to the beautiful @kellyrowland, who will help so many young ladies going through similar struggles referenced on #DirtyLaundry.

Jeanette Jenkins: Love you! @KELLYROWLAND #DirtyLaundry is a beautiful song! You’re so strong & I’m so proud of you! Shine Mama! Xo

Jordin Sparks: Dirty Laundry is so gut wrenching! I had chills up & down my entire body! Thank you for being so raw!! <3<3

Check out the Lyrics
While my sister was on stage killing it like a mother
I was enraged feelin’ it like a mother
Bird in the cage, you would never know what I was dealing
we went our separate ways but I was happy she was killing it
Bittersweet, she was up I was down.
No lie I feel good for her, but what do I do now?
Meanwhile, this n-gga putting his hands on me
swear y’all don’t know the half of this industry.Chorus
Let’s do this dirty laundry, this dirty laundry.
Let’s do this dirty laundry, this dirty laundry.
When you’re soaked in tears for years, it never airs out
When you make pain look this good it never wears out
It’s dirty laundry, dirty laundryAnd it’s almost been a decade, I’m behind them black shades
Roll up like it’s all good, riding in that Escalade
Fix my make up, get it together Kelly get it together
Then we make up, we’ll get it together, get it together
Kind of lucky I was in her shadow.
Phone call from my sister. What’s the matter?
She said Oh no, You’ve got to leave.
I’m on the kitchen floor. He took the keys
I was mad at everybody. I mean everybody.
Yea her her her, everybody
Five years later, I got my sh-t down pat.
Think I had it good and they don’t know how bad.
Fooled everybody except myself.
Soaking in this hurt, bathing in this hurt.[Chorus]So here I am in this spin cycle,
We coming and we going, nobody could notice
I was trapped in this house lying to my mama
Thought it could get no worse as we maximized the drama.
Started to call them people on him, I was battered.
He hit the window like it was me until it shattered.
He pulled me out and said “Don’t nobody love you but me
not yo mama, not your daddy and especially not Bey”
He turned me against my sister, I missed ya!

I am so proud of Kelly for coming out and talking about the situation she was in. Wonderful Empowerment to women. #OnPointCeleb

This song and beat is OnPoint. This is a women’s theme song. Love it! This is song is going to be on repeat. 🙂